THE COUNTING BOOK OF PRINCE HAYO THE HAPPY 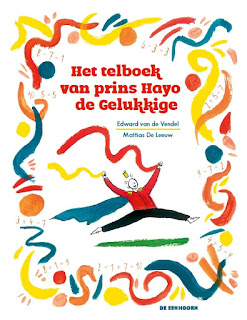 After working together on DERTIEN RENNENDE HERTJES and MIJN FIJNE GELUIDENBOEKJE Mattias and I wanted to make a new, big book. Here it is. It's about Prince Hayo. We follow him from his birth to his 10th anniversary - in a wide spread we see the celebrations for each of his birthdays, and especially we learn about the presents he gets. At the same time we see him growing up, but it seems something is missing. Until he becomes 10...
Each chapter is named after the number of Hayo's birthday (one, two three et cetera) and in the big and colourful illustrations we can count lots of things. Although there is a story, this is also a book to practise early mathematics.

- Prooftranslation in English is available