DJANGO AND THE PARROT 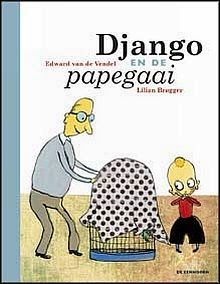 This was my second of two picture books with the great and famous Danish illustrator Lilian Brøgger. I met her in Berlin (at the Literature Festival) and we teamed up to make these books about the lively little Django. In this book: Django wants a parrot. When he finally gets one from his grandpa, Django is overjoyed. But not for long, because Django is allergic and the parrot has to go. Django is terribly sad. Grandpa gives him a goldfish, but Django doesn't like his new goldfish at all... or does he?

- The book was issued both in Dutch and in Danish.
- One year earlier the first book about Django was published in both countries: DJANGO HEET DJANGO.