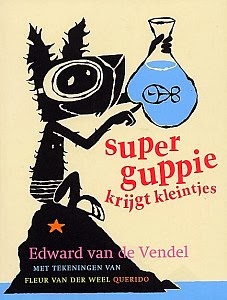 For this second volume of Superguppy-children's poetry I again made 49 short poems, always with a quite practical, normal-day title and subject, then trying to give it a poetical or funny swing. The fantastic playful illustrations by Fleur van der Weel make all the poems coherent.

- An earlier volume was
SUPERGUPPIE (2003),
later volumes were
DE GROETEN VAN SUPERGUPPIE (2008),
HOERA VOOR SUPERGUPPIE! (2010)
and the big collection of all the volumes (& new poems as well) SUPERGUPPIE IS ALLES (2014).
- In 2005 I made a cd with composer and producer Edwin Schimscheimer. The poems were turned into lyrics and Edwin made songs out of it, which were sung by a terrific bunch of famous Dutch artists (under the title SUPERGUPPIE ZINGT, Superguppy sings).