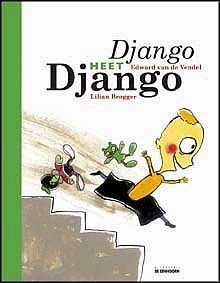 This was my first of two picture books with the great and famous Danish illustrator Lilian Brøgger. I met her in Berlin (at the Literature Festival) and we teamed up to make these books about the lively little Django. In this book: Django’s name is Django, but not today! Today, Django wants to be called Sir. Daddy agrees, but he does not know what he is letting himself in for. Because Sir is stone-deaf when daddy addresses him with Django. And so Django makes a mess in the kitchen and plays in the rain. But then Django hurts himself...

- The book was issued both in Dutch and in Danish.
- One year later the second book about Django was published in both countries: DJANGO EN DE PAPEGAAI.