THE BOY WHO FOUND HAPPINESS 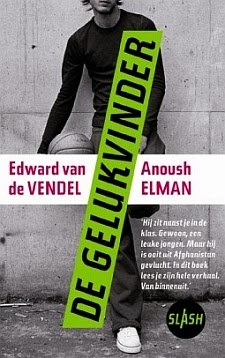 This novel, which is very dear to me, is based on the true life-story of Anoush Elman (17). It was the first book in the Slash-series, a concept I initiated and that was kindly adopted by my publishing house Querido. In this series well-known authors team up with a younger person - to use their stories as the basic idea for their novel (so the books are 'based on a true story'). Because of this procedure these books try to reflect important tendencies or issues from modern society. THE BOY WHO FOUND HAPPINESS is about the young Hamayun, who has to flee with his family out of Afghanistan, after extreme threats by the Taliban. It's also about the difficult and amazing secret travel they made from Kabul to Western Europa ánd it's about being in a refugee shelter for many, many years, waiting til Immigration Offices make their decision - or not. The subject of this book sounds highly political, but Anoush wanted to tell me not just the bad things, but the good parts as well. 'For me it's actually a book about friendship,' he said, 'friendship and being at home.' I'm still in close contact with Anoush and his family, and this has enriched not only my profession, but also my life.

- The Dutch Translation Fund made a special on this book, to be found here.

- The book was also published as a novel for adults.
- The Slash-series consists of 13 more books, by other authors and other young storytellers.